Try to keep up.

Well, that doesn’t refer to me but refers to women like Laura Nyberg and Sandi Vashro pictured below – spent two cold mornings to bag some turkeys. 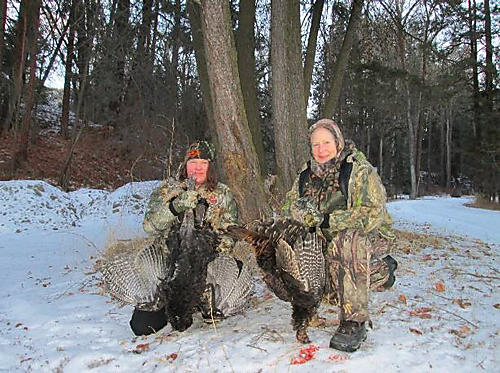 It’s no secret hunter and angler numbers nationwide are flat or declining. That’s a huge concern because hunting and fishing license dollars and excise taxes on sporting gear are used to fund fish and game management agencies. Even more concerning are the many threats faced by fish and wildlife populations. Hunters and anglers have been great advocates for wildlife, pushing awareness and pushing politicians and agencies to conserve and enhance fish and wildlife and their habitat and protect public access. The North American Wildlife Conservation Model and the recovery of fish and wildlife populations in the last century is a great success story, a movement pushed and funded by sportsmen and women. But many hunters and anglers are graying out and younger people don’t seem to be inclined to outdoor sports. And younger people definitely are not inclined to join sportsmen organizations. The collective power of groups like Flathead Wildlife, Inc. magnifies and focuses our separate voices “To preserve and enhance our hunting and fishing heritage”.

What are the solutions? We can each mentor younger people. Programs like “Hooked on Fishing” introduce youngsters to fishing and aquatic habitat at a young age. Flathead Wildlife’s own “Preserve the Tradition” youth hunting campaign is aimed at encouraging young hunters. One group that is under-represented in the outdoors is women. Montana does better than most states but there are still about 3 times as many men as women hunting and fishing. But there’s no clear reason for the disparity. Women are the fastest growing demographic sporting group across the nation and that’s a good sign. What drives women to participate, what obstacles are there, what can we all do to encourage more women to come afield? At the Membership meeting Wednesday, February 13 we will look at the status of outdoor recreation in Montana and also have some notable women hunters and anglers tell us how to encourage more women in the outdoors. And there are programs like Becoming an Outdoors-Woman (BOW) sponsored by Fish, Wildlife and Parks. Flathead Wildlife will help sponsor a BOW ice fishing workshop on February 15-16 in Kalispell. Looking for a Valentine’s gift for your sweetie? Give her a certificate to the BOW workshop. She won’t be expecting that, who says you can’t still surprise her?

I know a Methodist minister, his wife played music during his service one fine Sunday. Afterwards they went out and got a load of firewood. She shot a deer, they threw it on top of the load.

And that night she gave birth to their son.

Try to keep up.

The preceding comments are mine alone and don’t necessarily represent policies of FWI. Jim