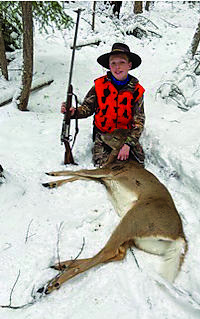 Tyler Jorgenson harvested this dandy whitetail doe in the Swan last fall using an 1898 30-40 Krag that had been used in the Spanish-American War. Tyler’s grandfather, Dale, purchased the rifle in 1964 for $27.50 and used it to shoot his first deer in 1965, a 2×2 whitetail in the Swan. Dale shot many deer and elk with the 30-40 before handing it down to his son, Duff (Tyler’s father), who shot his first deer, a 2×2 whitetail in the Swan. Last fall, 12 year old Tyler became the 3rd Jorgenson to take his first deer with the 30-40 Krag. Holding with tradition, the rifle is still outfitted with the original open sights to make it more challenging. Tyler plans to hand down the rifle to his children to Preserve the Tradition – Jorgenson style.